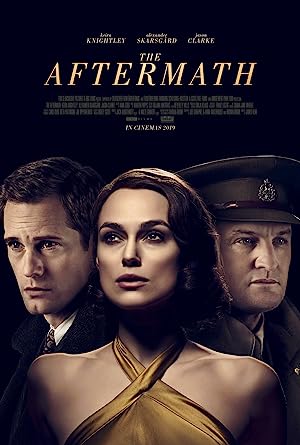 The Aftermath is set in postwar Germany in 1946. Rachael Morgan arrives in the ruins of Hamburg in the bitter winter to be reunited with her husband Lewis Morgan, a colonel of British Forces Germany charged with rebuilding the shattered city and dealing with violent insurgent Werwolf activities. The couple, whose relationship is tense due to their son Michael being killed during the Blitz by German bombing, will be staying in the requisitioned house of German architect Stefan Lubert and his teenage daughter Freda Lubert. Lewis decides to let Stefan and Freda stay in the house in the attic, a decision that Rachael is initially unhappy with because of her resentment toward Germans over Michael’s death.

Post World War II, a British colonel and his wife are assigned to live in Hamburg during the post-war reconstruction, but tensions arise with the German who previously owned the house.

Set in postwar Germany in 1946, Rachael Morgan (Keira Knightley) arrives in the ruins of Hamburg in the bitter winter, to be reunited with her husband Lewis (Jason Clarke), a British colonel charged with rebuilding the shattered city. But as they set off for their new home, Rachael is stunned to discover that Lewis has made an unexpected decision: They will be sharing the grand house with its previous owners, a German widower (Alexander Skarsgård) and his troubled daughter. In this charged atmosphere, enmity and grief give way to passion and betrayal.